How does it come to this?  As members of society continue twisting the true narrative of Colin Kaepernick’s protest, which is the unjust lethal police brutality directed against blacks.  That narrative continues to get lost while morphing into some grotesque, racially charged, dangerous pseudo-patriotic propaganda campaign.   The real danger in all of this is that the world is watching, especially the adversaries of this nation as the U.S. fails to examine the reality of its own reckless existence.  The truth is that existence realistically is based on the racial and ethnic diversity of the nation which is roughly 30% Latino, 22% African-American, 8% Asian and 40% Caucasian; it’s also 51% female for a total of 330 million people.  However, 330 million is a drop in the bucket that is only 1/5 of the two fastest growing economies in Asia, that of China and India both flirting with populations around 1.5 billion.  Their civil and military infrastructures are becoming more sophisticated, they both have standing armies larger than the US, and they both possess nuclear weapons.

In the meantime the coded language by white nationalists in the U.S. not so subtly continues to splinter the 330 million of this nation by undermining its morale.  Due to white insecurity masquerading as supremacy their actions destabilize and polarize the nation while creating racial and ethnic animosity.  The so-called nationalists continue to steer the nation towards a dead-end based on white (male) supremacy that mathematical probability implies is a losing proposition.    What that means is even in this imaginary world they’ve created they cannot and will not procreate fast enough to catch up with China or India, or even the 330 million they’ve splintered yet need to keep this old jalopy called the ship of state appearing like a super power.  Although that concept may have temporarily presented a mirage of  nuclear dominance for about 30 years after World War II,  it only camouflaged a declining reality that this inherent strategy predicated apparently on white supremacy will not sustain.  It is socially and economically reckless from a national security standpoint for this nation’s leaders to continue to be lulled into entertaining this superficial concept.

We’ve tarried during the 50s and 60s in the U.S. while exploiting the benefits of the prior 50 years of Jim Crow and its discriminatory policies of separation, so-called separate but equal, and denying citizens of color the most common of privileges while reinforcing a perennial false perception of white supremacy.  After World War II both Asia and Europe were required to rebuild their infrastructures in the wake of their own physical and economic destruction, further reinforcing the mirage by borrowing money from the US to rebuild under the Marshall Plan.   However, it only temporarily delayed the inevitable as the US has failed to develop its human resource potential.   We now find ourselves falling rapidly behind other nations of the world whose development depended on us just 70 years ago.  We continue to go in reverse seeking false comfort with policies that mirror the early 60s of LEAVE IT TO BEAVER and FATHER, (the white one) KNOWS BEST, which is nothing more than a continuation of a long-termed failing perception.  The longer we engage in this futile concept and put off education and development of all of our human resources, as well as a safety net for the general wellfare of our citizenry, we undermine our own national security, and based upon our own gigantic egos of dominance and supremacy we then become the one to be considered the reckless nuclear threat.

Carla Maloney, who is the ex-Republican Committee of Beaver County’s secretary wrote .

“(I’m) Tired of these overpaid ignorant blacks telling me what I should believe in.   I will tell you what I believe in and that is our Flag the National Anthem and America period end of story,” ……“Steelers are now just as bad as the rest of the overpaid baboons… How many men and women have lost limbs or died to protect this country and you baboons want respect,” she added, “Let’s see how the baboons get paid when white people stop paying their salaries.”

In the United States of America, it appears that people seek to engage in continuous acrimonious emotional confrontation instead of addressing the veritable issues that undermine the unification of a diverse society.    They’ll persistently invent excuses, building to a heightened crescendo laden with racial froth dripping from their lips.  They circumvent the realities, in an attempt to change the truth into a false narrative rather than address the compelling facts in any type of cogent manner.  Consider this continuous confrontational engagement involving Colin Kaepernick and now other NFL players who kneel during the national anthem. 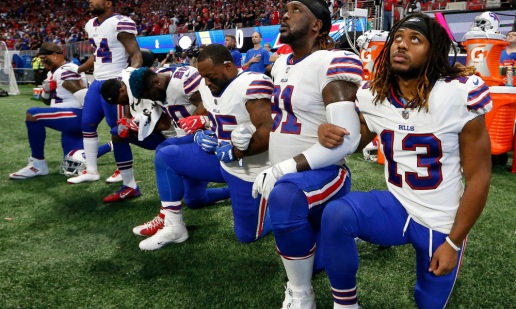 Kaepernick had, as so many Americans witnessing this madness, reached an emotional breaking point where the psychic impact was so overwhelming seeing so many young black men inexplicably gunned down over petty misdemeanors by police officers acting under the color of authority.

He knew his silent protest would draw national attention that many of us could not.  However, it would take a self-aggrandizing US President to distort the meaning of Kaepernick’s protest by playing on the inherent racist bigotry among his political base and fraudulently wrapping themselves up in the American flag. 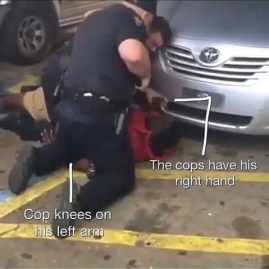 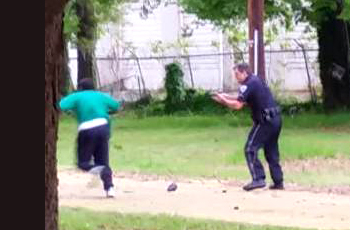 Who, after seeing such heinous acts, could sit silent and assume that the wanton taking of innocent lives of unarmed individuals by police should be ignored?  Even the thought that people could be mollified by sitting in front of a television rooting for their favorite hometown NFL team was simply a fantasy in light of the outside realities that Kaepernick could no longer stomach.   It had to bother him, as it does many of us right now, that no one within our national, political or commercial, power structure was willing to speak out and address these continuous inexplicable atrocities targeting black males.   With such realities running across his mind how could anyone feel that he should feel comfortable leading his team to victory at the quarterback position?  For Keapernick to remain silent while bearing this psychological burden was simply unconscionable.  White journalists attempt to dilute and define Kapernicks burden by abstractly alleging his protest is against the injustice against blacks or a protest about black lives matter.   The Black Lives Matter movement didn’t need Kaepernick to drive it, it has its leadership.  Kaepernick’s protest was focused on the absurdity of the repeated taking of innocent lives by police in the hideous visceral assaults of seeing two innocent black men killed by police on tape within 24 hours in Baton Rouge and Minneapolis.   The attempt to dismiss the emotional impact by authorities as well as the press of the murders of Alton Sterling and within hours Philando Castile was too much for the mental psyche of any reasonable thinking human being to accept.

This is what appears to have driven Kaepernick to say no more by displaying his dissatisfaction by taking a knee.  In essence, he said that he was not going to be a part of America’s Sunday afternoon pacifier, NFL Football, and pretend to ignore these heinous acts of violence against innocent individuals.  That is the prevailing issue; however, what has provoked certain whites in general,’ several in public positions, in the United States to skirt around that stated concern by Kaepernick and millions of others in this country is mystifying.  More concerning is how the NFL franchise owners have not addressed this epidemic of petty misdemeanor killings.   The owners know that this type of unprofessional conduct is wrong yet they are too afraid to speak up.  Were they to affirm the narrative with their weight they would not be appearing as though they are driving against on coming traffic on a one way street.  Their failure only pours more gas on the fire.