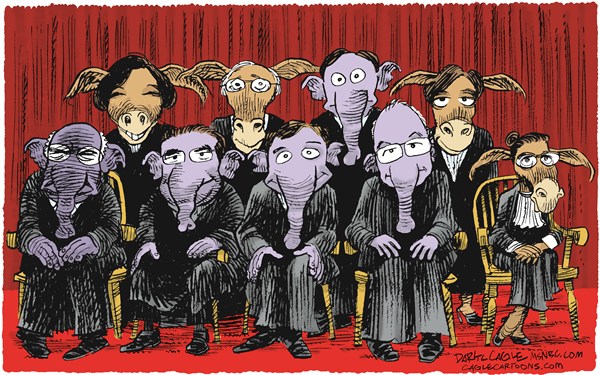 By guest writer, T.H. Johnson, of the OMIG organization

WHEN IS THE JUDICIARY GOING TO CHIME IN? IS THIS NOT DANGEROUS SEDITIOUS BEHAVIOR OR WHAT?

The independent divisions of government consisting of the Executive, Legislative, and Judicial branches supposedly enjoy an equal power in governing this Republic of the United States. However, how is this power expressed as being perceptively equal when the executive branch with the swipe of a pen, or not, has the power to induce an inordinate amount of governmental dysfunction into our daily lives? Actions that destabilize markets, create uncertainty and insecurity in the lives of those with the least of power after an election is over.

Whereby the Executive division’s injection of coercive actions into a political debate in an attempt to strong arm another are seditious-ly one sided, impacting departmental employees, while starving and holding the citizenry as hostage. At what point does the Judiciary say foul and unlawful? You quietly do little or nothing at all to inject any level of judiciary authority or weigh-in on this insane conduct and thus you appear ambivalent to the public’s perception of you not caring because the judiciary’s salary of approximately $25,000 per month is not interrupted.

Federal workers who do their jobs diligently within the bowels of this nation’s governmental departments keep the wheels of the ship of state turning for less than 20% of the judiciary salaries but who can no longer buy groceries because of an egotistical move on the part of the head of the executive department of government. Not only is the perception inequitably unfair the conduct of the executive department appears to be dangerously reckless and self-serving. These workers should not be used as pawns in this egotistical power play by a President who appears to have a malignantly narcissistic personality that fuels his own ambivalence towards the pain of others.

The same perception of ambivalence applies to the members of Congress whose salaries are not directly effected either. However, since the past often incoherent and mean spirited Congressional stalemate during the Obama administration, we the people have become desensitized to Congress’s failure to move any type of meaningful legislation. Thus, some of us now await some type of reasonable intervention from the third leg of this so called balance of power; an action by the judiciary.

Nevertheless, the question remains, as to how the judiciary, the third leg of the balance of power in this Republic, is negligent in expressing any type of cogent decision when a questionably competent, and narcissistic, individual’s action in one department indirectly destabilizes the equilibrium in all other internal components of the government? What does the third leg in this balance of power do to maintain the stability of the Republic as a whole? Whether or not the conduct violates the criminal or civil statutes, the destabilizing effect of the executive department resembles some level of SEDITION, and that becomes a matter for which the judiciary should weigh in for the sake of the nation’s stability and tranquility.