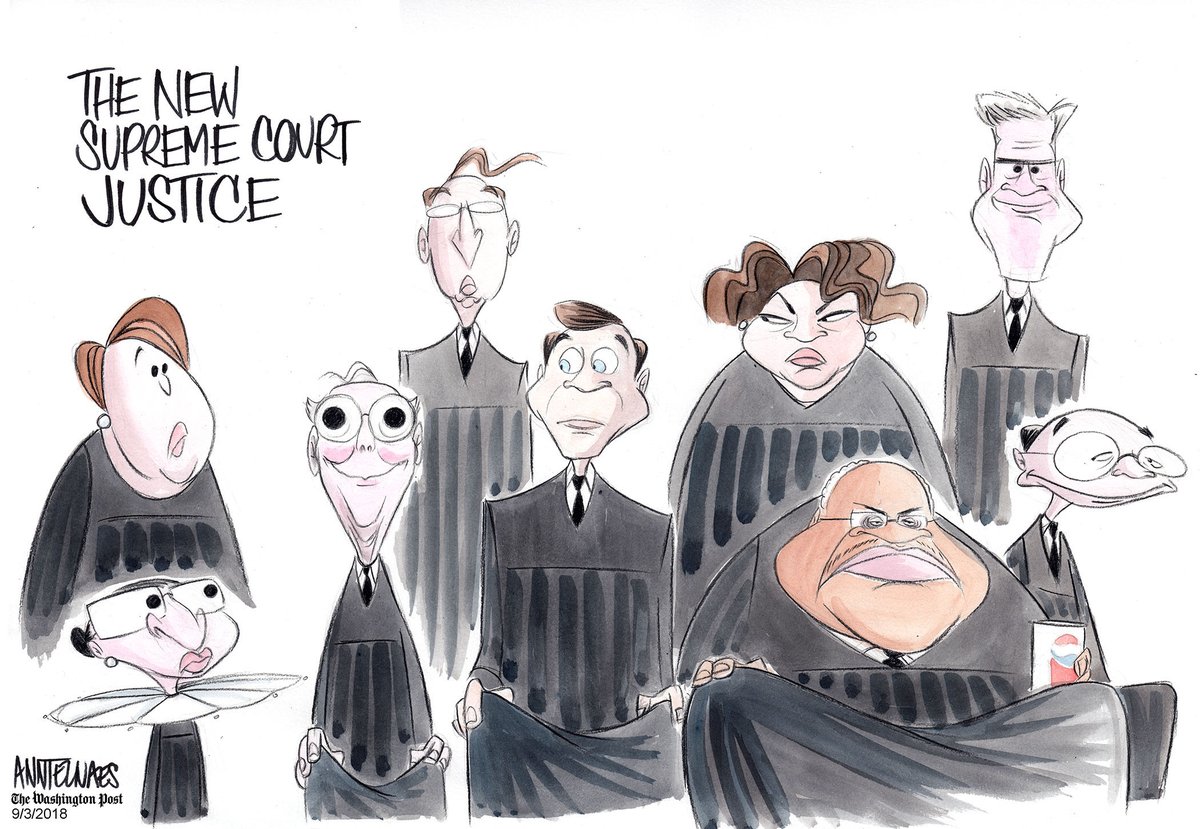 Thanks to the editorial cartoonist, Ann Telnaes, whose satirical political caricatures always leave an impression regarding the issues of the day.

You know that you established your position of equal authority, as the Judiciary, with the other two branches of government, the Executive and Legislative, in 1803 with the case of Marbury vs. Madison.

The same principle question then seems to be at issue in 2019, has the Executive division of government gone too far and exceeded its authority and by doing so impeded the federally protected guarantees of the nation’s citizens? The bottom line is that MARBURY allowed you to legally determine what was lawful in accordance with the US Constitution. Well, I’m here to tell you that we as American citizens all have a constitutional right to any and all liberty interests in whatever privileges this US government has to offer. By allowing this President to impede government workers from getting paid and doing their job to the point that they can no longer afford to go to work, you are abetting, what is arguably one person obstructing the liberty interests under the US Constitution for which all American citizens are entitled.

This President is unlawfully using a tactic that unjustly undermines in a seditious manner the vary Acts of Congress that afford us those privileges. He does so with a sense of unbridled impunity in regard to how long his political stunt will take. So, I ask you once again, Judiciary, when are you going to weigh in and take a legal position on this level of conduct from the Executive division? One branch cannot threaten to bring down the whole Republic simply to attain personal satisfaction at the detriment of others; yet isn’t this what is occurring?

The President still receives his paycheck regardless of the suffering of the rank and file blue collar government workers. He along with all the rest of you judges in the Judiciary and the legislative representatives in Congress don’t have to worry you will get your salaried checks, but hundreds of thousands of workers receiving as much as 80% less than what you privileged government public servants are paid will receive nothing at all for an indecisive period of time. There appears to be an ambivalence to this fact by this President, if it is left up to him, and that pure and simple is wrong. That reality comes along with all of the other money he makes, in all probability unlawfully, while charging people $450 per night to stay at his Trump International Hotel on Pennsylvania Ave in Washington, D.C. just five blocks down the street from the Whitehouse. What a picture of insensitivity the whole thing is.

In the meantime, government workers are made more vulnerable to making decisions they feel are in the best interest of their families because they are not getting paid. The resignations and/or failure to show up for work could prove to be replete with any number of unforeseen problems impacting national security particularly at our airports. So, do you on the Judiciary simply sit still and allow the infrastructure of the republic to be undermined by the narcissistic, irrational, authoritarian actions that supersede the lawful authority of a megalomaniac who it so happens to be our President?

Your silent ambivalence at the Supreme Court and the appearance of the injured government workers going without their pay is earth shattering.

T.H. Johnson, has been an investigator primarily in the OJ Simpson case for the last 23 years along with being an author and documentary producer of events that have been concealed in that infamous case.